Hillary Sits Down with DREAMers

Posted by Unknown at 1:32 AM No comments:

Caitlin Hewell introduces her Dad David E. Cozad at the Kick-off of his 2016 Congressional Campaign

Posted by Unknown at 1:29 AM No comments:

Posted by Unknown at 1:27 AM No comments: 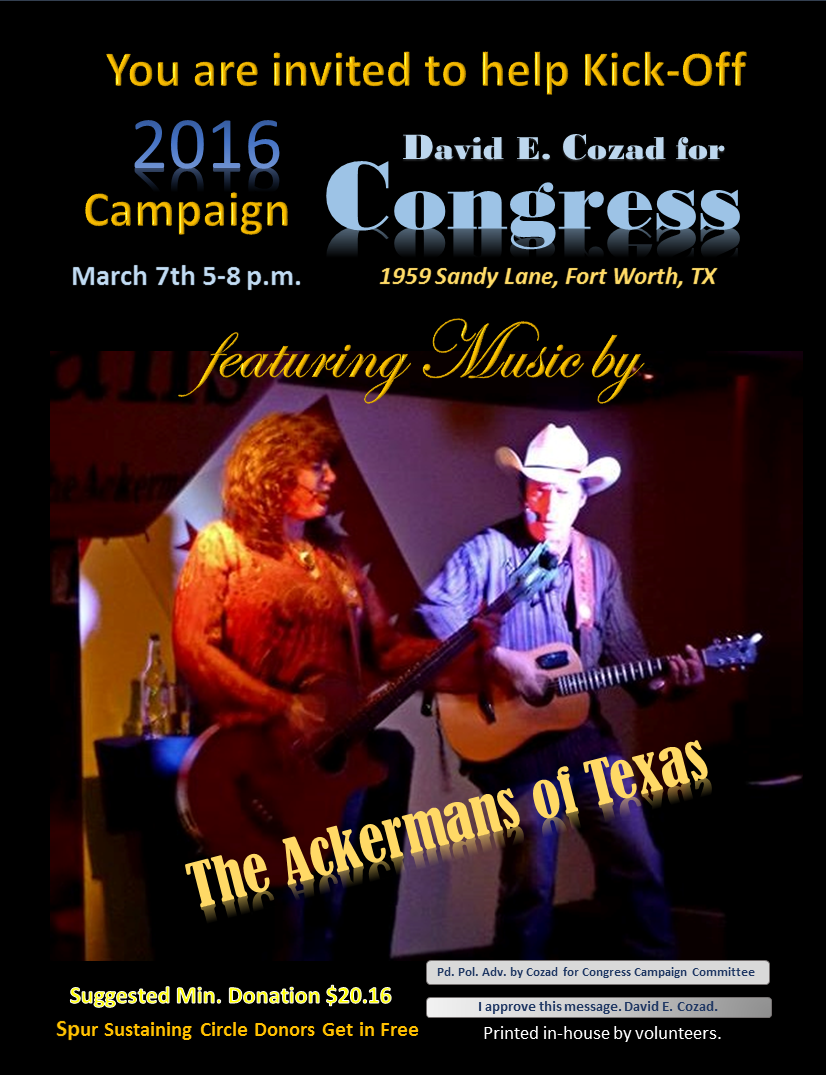 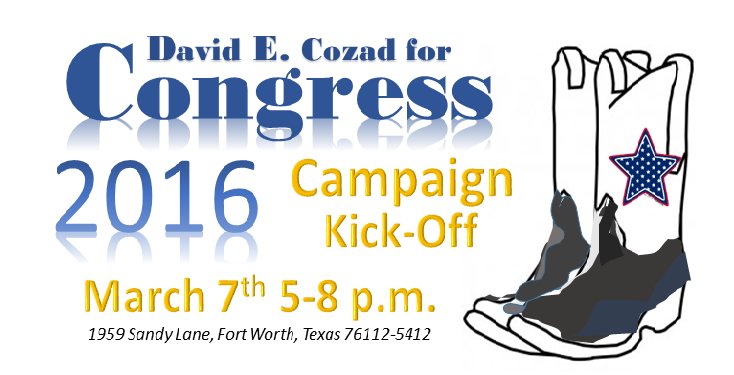 PUT ON YOUR BOOTS; IT’S TIME TO KICK-OFF THE CAMPAIGN March 1, 2015 Arlington, TX: Internationally acclaimed songwriting duo, The Ackermans of Texas, will perform at David E. Cozad’s 2016 Congressional Campaign Kick-Off in Fort Worth Saturday, March 7th at 1959 Sandy Ln. from 5 to 8 p.m. Mixing humor with a dash of social commentary into their foot-stomping blend of Texas Country music, Bob and Sally Ackerman have a loyal following in Europe. Residents of Dallas, they are based out of Switzerland for several months each year while they are on-tour performing in France, Germany and Switzerland. Their popularity grew in Europe a couple of decades ago when they began performing at “Save the Horses” events. Faith Chatham, Chief of Staff for the Cozad for Congress Campaign Committee said:

“The Ackermans of Texas are my favorite country group. I’ve been a fan of theirs ever since I first heard them perform in 2004. They live in Dallas but their music is better-known in Europe. Frequently, if I need to smile and feel good, I’ll put on one of their CD’s. As people, I’ve discovered that the Ackermans are music professionals who are generous with their talent. They truly care about what kind of world we live in and what shape it will be in to leave to our children. We are fortunate that they are returning from Switzerland this week in time to perform at David’s kick-off. Anyone who listens to their lyrics and knows David Cozad’s positions on the environment, correcting financial graft and exposing corruption, and the value of human life over greed and profit can easily see a philosophical match between the Ackermans of Texas and David Cozad.”

Historically, voters in Texas are more likely to elect Democrats to Congress in U.S. Presidential years than during mid-term elections. In 2014, a larger percentage of Texans voted for David Cozad for the U.S. House of Representatives Texas 6th District seat than voted for any non-incumbent Democrat running for Federal Office in Texas. Cozad is starting early and strong to get his message across Tarrant, Ellis, and Navarro Counties. Cozad is a problem-solver and is ready to make tough decisions to enact comprehensive immigration reform, job creation and public education to prepare Americans for good paying careers in tomorrow’s marketplace. He prioritizes transitioning to renewable sources of energy, preservation of our natural resources, and fighting discrimination in the workplace and government.
A former U.S. Marine Corps. Officer, David Cozad served with the nuclear capable artillery unit during the Cold War. He has taught High School math. He believes that the United States must be both economically strong and environmentally responsible. Candidate David Cozad supports “industry best practices and enforcement of sensible regulation. He says: “Preventing environmental damage and industrial accidents is smarter than attempting to clean-up and recover from them.” He is also dedicated to saving Social Security for American’s seniors. “Borrowing money from the Social Security Trust Fund and not restoring it is criminal” is the viewpoint of David Cozad. “American’s workers’ pay into the Social Security Trust Fund every time they earn a paycheck and it is American’s responsibility to honor their trust. This nation also has a “contract” of trust to provide veterans benefits to American servicemen and women for their military service to our nation.”
In business, his practical experience as an active participant in research and development resulted in microcomputer products which created jobs. Cozad was project leader of the development team at Motorola that added text messaging, paging and voice mail to analog cellular phone service. Revolutionizing the telecommunications industry, Cozad led the project through beta testing and service implementation in the Nevada and NW Coast Divisions and in Argentina and Thailand. They moved the phone from having only voice capability, turning it into a strategic product in a billion dollar market. Cozad knows that American ingenuity and innovation can develop projects which create jobs and improve lives, paying decent wages and return on investment.
Cozad is a progressive candidate with a strong interest in our country’s economic, social, and ecological health.
He knows that “business can make a profit” and “pay its fair share”. He is adamant that corporations that move jobs and headquarters offshore to avoid paying taxes should be penalized. “

Proceeds from the March 7th 2016 Congressional Campaign Kick-off goes to the Cozad for Congress Campaign Committee. Tickets can be pre-purchased for a suggested donation of $20.16 at https://secure.actblue.com/contribute/page/rsvpkickoff or by calling (817)909-2360. 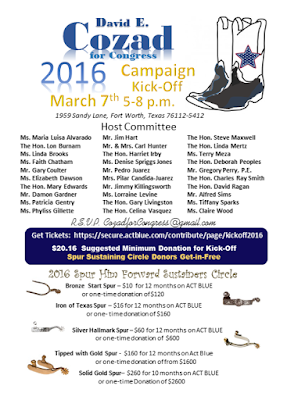 Posted by Unknown at 6:51 AM No comments:

Barton is unfair to wounded soldiers

Posted by Unknown at 8:08 AM No comments:

Barton failed to do his job on Health Committee; Cozad's priority is to keep my family and your family safe!

Posted by Unknown at 7:50 AM No comments:

Cozad has his priorities right for Veterans; Barton's been in office 30 years and hasn't solved VA Problems

Posted by Unknown at 7:13 AM No comments:

Articles By or About David Cozad